ANALOG VS IP CAMERAS
The principle difference between analog and IP cameras is the method by which the video signal is transmitted and, ultimately, whether the video is compressed or ‘encoded’ – which essentially translates into the quality of the image. 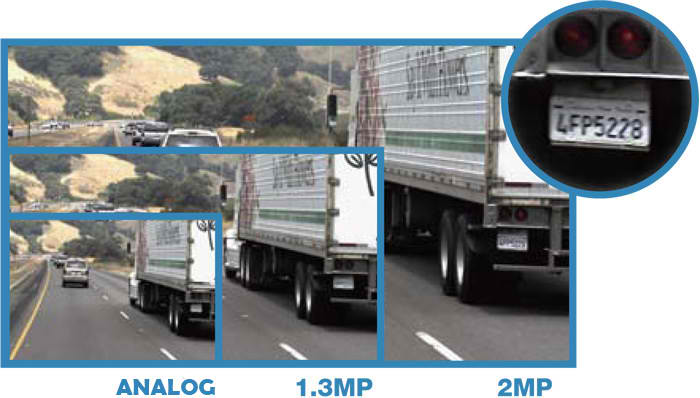 Analog cameras capture and then transmit an analog video signal to the Recorder (DVR). Sufficient intelligence is contained in the DVR to handle facilities such as scheduling, motion detection, and digital zoom. Monitors for viewing the video are connected to the DVR (or over an internal network for viewing on PC’s). The DVR can also be set up to broadcast over the Internet, where the video for all of the cameras is transmitted as one stream (one IP address), making the system very efficient.

Each IP camera captures the image and immediately converts it to digital inside the camera, where the resultant digital video stream can then broadcast over the IP network (internet). A high powered PC is set up with the appropriate software to record the cameras, demanding significant hard drive space. When viewing remotely each camera can be pulled up individually by its IP address.

Unlike the analog cameras (where all images are streamed to one IP address), each camera is a separate stream requiring its own IP address, which can impact bandwidth. The bandwidth used by cameras varies due to a number of factors including the resolution, the compression method, and even the amount of movement in the field-of-view. The bandwidth per camera may also double if audio is transmitted.

Many of the newest IP cameras have ‘megapixel’ resolution, which vastly improves image clarity and increases field-of-view, but uses considerable bandwidth and also requires a great deal of hard drive space to store the video. However, the improvement in image quality speaks for itself: Analog cameras provide resolution equivalent to TV standards (max. about 0.4 megapixel) whereas IP cameras are currently up to 10 megapixel and they tend to capture a clearer image when objects are moving.Set out below is a brief comparison of analog versus the IP camera, and while there is a number of factors to consider, and DyCom will assist you with this process should you require, and despite some the cost and technical issues associated with IP Cameras, the entire CCTV concept is based around capturing images so further action can be taken.

These images form the basis of any CCTV Security System, and it is DyCom’s view that this factor should be the driving force. Admittedly there are certain factors where the analog appears better than the IP camera (see below), but DyCom believes these are not the critical factors. If your security system generates clear images enabling you to tackle the issue/perpetrator then, in DyCom’s view, the security system has done its job. It is unlikely that an analog system, irrespective as to its other features and benefits, will deliver this solution.

CLARITY
IP cameras excel in capturing high definition, megapixel images but have trouble with low lighting conditions. Analog cameras perform well across a variety of lighting conditions and manage motion well. As analog compresses the video in the DVR there are more hardware and software resources available to provide increased video quality and frame rate. Analog cameras transmit the video image to the DVR uncompressed where it can be viewed live with no latency pre-compression.

COST
IP cameras can be three times more expensive than their analog equivalents. Additionally, there are per camera licensing costs for connecting them to the NVR. In some instances, IP megapixel cameras can be more cost effective by taking the place of several analog cameras. Large installations require managed network switching equipment and peripherals, which can become very costly.Analog cameras and peripheral equipment are significantly lower in price to their IP counterparts, and require little in the way of peripheral and managed equipment, which reduce costs. For most typical applications, when accounting for hardware, software and installation analog is a better value proposition on a pure cost analysis, but this may change when viewed from a cost vs benefits analysis.

COMPATIBILITY
IP cameras require a network video recorder (NVR) or browser that will communicate with each particular model of camera. Each time you add an IP camera, you have to make sure that the NVR supports that particular model. An NVR may also support only a limited number of cameras from a particular manufacturer. Many IP camera producers have a large variety of communication protocols. Any analog camera can plug into any DVR. There are no compatibility issues when changing either the DVR or any of the cameras.

SCALABILITY
One of the advantages of IP is its ability to simply add on cameras by plugging into any network connection. When scaling an IP camera system to an enterprise level there is a requirement for substantial managed networking equipment and significant bandwidth. Analog cameras can be virtually expanded as there is no requirement for bandwidth or data transmission between the cameras and the recorders. Since analog cameras do not require bandwidth they can exponentially scale with minimal network concerns as they are plugged directly into the DVR bypassing network transmission.

WIRELESS
One of the clear advantages of IP cameras is the flexibility to integrate with a wireless network. Whereas wireless IP is “virtually” unlimited in terms of expansion, bandwidth and the topology is still a concern. Analog cameras which use radio frequencies to transmit video wirelessly are limited to about a dozen cameras before capacity is reached in the unlicensed spectrum.

CONCLUSION
Integrated security solutions can become very complex, particularly if one wants to integrate a suite of solutions, including CCTV Surveillance, Access Control (designed to control who can enter your premises and/or parts thereof) and Building Management Systems (to manage and control utilities, elevators, etc.).

DyCom Security Solutions is a specialist IT and security consultant, who can both advise and assist with all your security requirements. As the DyCom Group also has in-house wireless and networking skills, we are able to continue to undertake both large and complex projects using our combined in-house skill set.

DyCom would be delighted to work with you to design the most cost effective but productively effective system across all of your IT and security needs. We offer a no-cost no-obligation discussion and quotation, so before you leap into a solution, please call or email DyCom for their specialist input.